Ben Shaw is a singer-songwriter based in the United States. Ben's music is a song-driven, modern folk where lyrical melodies are sung with barroom grit, embellished with psychedelic Americana. In 2016, after a decade or so of avoiding the spotlight, Ben released his first full length album in over 15 years, Feet to the Fire.

Ben's first solo gig was ages ago in 1991 at the Cabin folk club on the University of Wisconsin- Eau Claire campus. For the ensuing 11 years Ben had the good fortune to make music in the creatively rich music scene of Eau Claire, WI as a solo artist and in the bands Lawnmower, Ala Balik, and the Embellishment. In 2002, he moved to the west coast, inadvertently hung up his performing shoes, and became a recording engineer and a lawyer.

Eventually, the Universe, through a series of coincidences, led Ben to a beach in Malibu, CA, where he reclaimed himself as an artist, was lovingly pushed back onto the stage, and was gently planted in the musical epicenter that is Laurel Canyon. Fortunately, in that decade or so of hiding his art from the world, he never stopped writing songs. At the dawn of 2015, Ben found himself in a funky little musical house filled with recording gear, guitar pedals, and two loving musical guides. In the ensuing 6 weeks, a spiritual, creative relationship began, which culminated in his 2016 release, Feet to the Fire, a sonic painting, which embodies the love and experiences he has been given in his life by so many.

In 2018, Ben recorded his follow-up record, Bonita, at Pine Hollow Studios in Eau Claire, WI with Producer Evan Middlesworth (The National). The album was released in August of 2018.

Ben has collaborated on several projects including “Fading Dreams” as one half of the duo, Jill and Ben (2019), lead guitar on "Hudson River Blues" with The Kinteners (2020), and sang on "Ashtray" for the Kintners' Collaborations (2022).

Ben's concept album, The Iciclist, is in production with Jamie Hill at Department of Energy Management Studios and is set to release in 2023.

Just finished recording a dozen new original songs with my touring band for my next album! It is beautiful.

I can't wait for you to hear this music! To do so, I need your help.

Instead of using a record label, we decided to reach out to our community to help fund the project so we could make the best album possible. This crowdfunding campaign will help to raise the funds to record, mix, master, and release this album. In exchange for your help to finance this record, you will receive a variety of unique thank you gifts, depending on the amount of your donation.

I hope you join me in making this music available to your ears and the World.Here is the link: https://www.indiegogo.com/projects/help-my-next-studio-album-take-flight-headphones/x/18518093#/

I had the the pleasure of being interviewed by Craig Van Oosten for his #IndiePendenceDay cloudcast.

Ben is on the radio!

After returning from a successful Summer Tour, you too can now own what was only available on the road: CDs and T-shirts. Click the Store tab to grab some.

I was deeply affected by the tragedy in Paris last November of 2015. Writing music is a source of healing for me and I wrote this song in response to the madness that day. Today, June 12th, another senseless tragedy inspired by hate occurred in Florida. I have been in the midst of making a video for this song, but the release of this song cannot be delayed any more. I hope it brings you the peace and healing it has brought to me and that you will join me in the army of love.

Purchase a copy for PC/tablet only on my music page (http://thebenshaw.com/music).

Will be in digital stores soon.

Feet to the Fire

The long-awaited album, "Feet to the Fire," is here!! 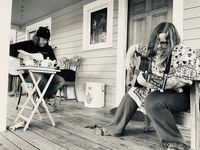 Ben Shaw returns to Bailey's Corner Store to perform his upcoming concept album, The Iciclist, which releases in 2023.

No admission. A hat will be passed to support the musicians. Cash and credit card.

6PM: Ben performs The Iciclist 7:30: Avery performs. Kitchen closes at 7PM, so get your orders in for a tasty burger or other carnivore and vegetarian deliciousness.